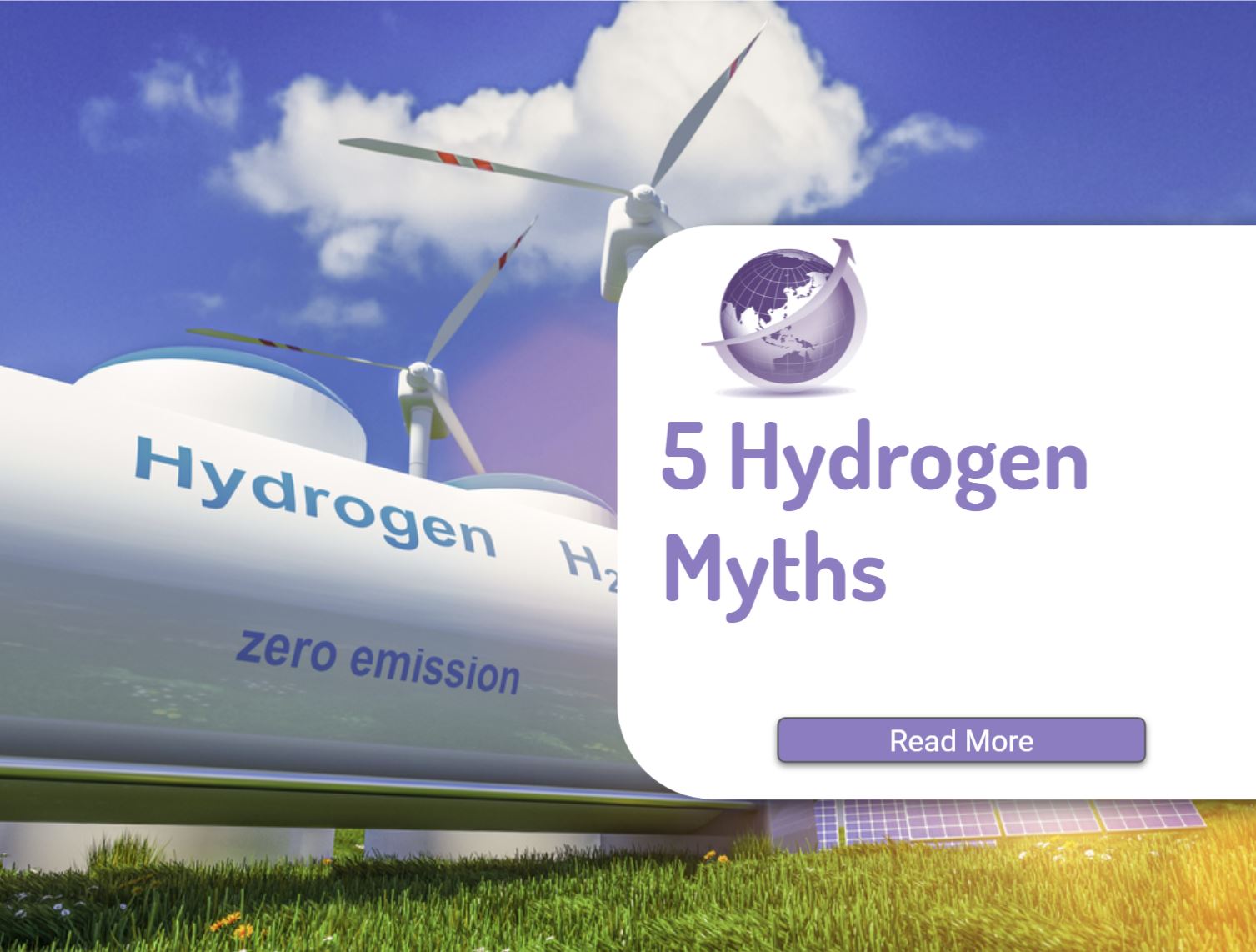 Hydrogen is in the news these days – all the great things it will do but I would say these are hydrogen myths that are spread by reporters with poor understanding of science and technology. Hydrogen has been in the news for the past 50 years since the great oil shock, and has not appeared to have made huge progress, except for political Noise. It is going to power the transport the transportation system, run our cars, our heavy transport and save the renewable energy space.

So I challenge you to dispel the hydrogen myth. For me, I have been saying for years it just did not make sense, after listening to Tony Seba 8 years ago. But more focus and a bit of awakening after listening to some podcasts, reading the news, digging up some science articles to validate that what these podcasts and videos were saying was true. I say there are 5 hydrogen myths to know. Discern the reality from the hype.

What Contributes to Hydrogen Myths

1. The Physics of Hydrogen Energy

Hydrogen is useful but it is just stored energy. While abundant (as the Hydrogen in water H2O) to get it to H2 it takes energy. Not much use by itself, so it either get burnt (for heat energy) or is used in a fuel cell (which creates energy and water) but in most applications that fuel cell generates electrical energy to store in a battery and then in an electric motor for motion energy.

It takes 3 times as much energy as renewable energy and batteries. I.e. 3/4 is wasted in the process. Yes – better than fossil fuel but it means an inefficient use of the sunlight to energy process.

And today there is not a plant in the world making large quantities of green hydrogen. The capital cost of the hydrolyser means it will need to run at high utilisation, and that means it will required 24 x 7 renewable energy to be fully green/

It turns out the current cost of gray hydrogen is from $8 to $16 per kg based on fossil fuel production of grey hydrogen.

The cost needed to be competitive with batteries $2 per kg or some even say $1 per kg.

Basically it needs a cost down of 10 times otherwise it is an pipedream. It is possible, as PV panels have come down 20 times in the past 20 years. Possible. But not probable.

Eg, Ten years maybe before it gets there economically, and some say it might halve by 2050! eg. This article from Nasdaq.com

3. Sources of Energy to Create Hydrogen

Some say there are 3 types of hydrogen but terms are a bit fluid.

Listen to the podcast with the head of BHP green energy team, Rio, the CEFC, and Enel Green Power. It turns out green hydrogen is 10 years away from actual reality. The conclusion from these and others is to forget hydrogen for anything moving. Hydrogen may have a use in iron production or in burning but ) Remember it has to drop by 10 times at least.
One of the reasons is that green hydrogen needs renewable energy, and the “hydrolyser” which turns water into hydrogen has a huge capital cost. So it needs to run at 90% or higher. And that does not include other energy costs, the huge amount of water needed (so that needs seawater and desalination, storage costs and inefficiencies in conversion back from hydrogen to energy.

4. Who Are the Big Promoters

The same fossil fuel companies are the biggest protagonists? Why? The have the business model from gas. They own the manufacturing, the distribution and sales of fossil fuels. Substituting H is duplicating the model.

Most plants are still pilot plants. A Danish power firm’s “SeaH2Land” development will link gigawatt (GW)-scale electrolysis to the large industrial demand in the Dutch-Flemish North Sea Port cluster through an envisaged regional cross-border pipeline. (see here) The green electricity required to produce the renewable hydrogen is expected to come from the build-out of additional large-scale offshore wind. Planned plants in North West Australia has run into regulatory headwinds and disapproved by the Australian Government.

5. Is there a Use for Hydrogen

It may be useful to have a product for burning. It is high temperature and steel companies are piloting steel mills to use hydrogen rather than coal. There are some pilot plants (eg Norway see here) or in Europe. Most of them have to develop the hydrogen as well as the change to the mills themselves, but it appears it works well.

But if you have wheels, then you can carry the fuel with you. It does not matter too much how heavy the battery is. The lighter, the further the range. The improvements in charging speed from hours to a few minutes means the primary argument for hydrogen has gone.